2. THE WHOLE SHEBANG IS BEING RIGGED

Generally the Prime Minister open his mouth rarely and speaks even less. And whenever he or for that matter, any of his ministers speak, this is how most of us react

And our reactions were more or less similar, when our Prime Minister went back to the 1980’s vintage, ‘Foreign Hand’  theory when he railed against the Kudankulam protest.

This time however, for a change, he made sense.

The story actually begins in 1974. The year in which Indira Gandhi decided, that India needed some nuke bombs.

Let us say the US was as benevolent towards India after that nuclear test, as US today is towards Iran.

In line with the US policy of benevolence, India was slapped with a trade embargo, which among other things, prevented us from getting something called, Uranium. And without the Uranium, the entire nuclear infrastructure in the country at that time, went into panic mode. The reactors were scaled down and the power generation was cut, because we did not have sufficient fuel.

Because India refused to sign the Nuclear Non Proliferation Treaty, no Uranium rich, decadent western country, was willing to sell Uranium to us. According to them, If India ever gets Uranium, she will peddle it to the first crackpot dictator who wants to build a bomb.

India was effectively placed in a quarantine, and denied access to anything that was remotely related to ‘Nuclear’

The status-quo continued till 2008, when George W Bush arrived in India.

Amidst all the despicable things George.H.W.Bush has inflicted on this world, he has to get credit for one thing.

He was the only guy who got Manmohan Singh to talk. In fact ‘Dubya’ Bush is singularly responsible for Manmohan, speaking  up for something, that does not have the word ‘Gandhi’ in it.

If you are wondering If I am making that up, here is a clue,  do the words INDO-US NUCLEAR DEAL mean anything to you?

Well, for Manmohan Singh, it meant a lot. Hell, it meant so much that, MMS flipped the normal protocol of ‘Madam Tell, Me Follow’, upside down. And he allowed a India, a brief glimpse of a part of his anatomy, that is called the spine. For the first and the last time as a P.M, he opposed a major coalition partner, stood his ground and got something done.

But, there are no free lunches in the capitalist world.

When the US guys told us they will take care of that NPT thingy and get us all the Uranium we need, as a quid pro pro, they demanded a major slice in the Indian nuclear power pizza. In fact they wanted the whole pizza. You see, the whole point of this generous nuclear deal, was to ensure the US derives the maximum economic benefit out of our inevitable nuclear boom.

And a major hurdle in the quest for that pizza.

You see, the reactors used to generate electricity in Kudankulam, the aforementioned VVER-1000 reactors, are a direct competitor to General Electric’s Advanced Boiling Water Reactor. And if the VVER-1000 is successful, India might opt for more of these reactors to satiate her power demands, which are projected to go North.

And if that happens, the US would become the guy, who did everything possible to impress a girl, only to see a direct competitor walking away with the credit and the girl on the first date.

Just think about it, the other Nuclear project announced after the deal was signed, was Jaitapur. And it was a French one. And guess what is happening there, 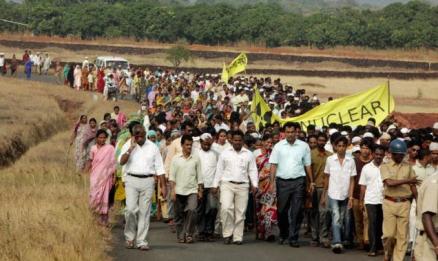 In short, USA has every reason, to pray for the failure of Kudankulam. Because, if it is successful, they have the most to lose.

According to the Ministry of Home Affairs, they were misdirecting the funds meant for social work, to fund a political protest. Which is explicitly stated as wrong,

The ministry of home affairs, has an amazing web-page. They list all the transactions made by the NGO’s who receive  more than one crore a year.

Here is the 2010-2011 account statement of the Tuticorin Multipurpose Social Service Society (TMSSS).

If you notice, the maximum money, has been spent, in activities, mysteriously classified as ‘Others’. No explanation has been given on what those activites constitute. Now, this particluar NGO has received more than Rs 42 crores in foreign donations, over the last five years.

But, they don’t even have a website of their own. A website where they can publish detailed accounts of what they are doing with all the money. Introduce some modicum of transparency. Now, why is that?

Similiarly, the other NGO, the Tuticorin Diocese Association, received 22 crores in the same period. And they too, do not have a website, or a statement.

So, this mysterious money trail leads to a dead end. But that is not the only problem. On 6th of February, the Home ministry stated, that these very NGO’s received 54 crores from sources abroad.

Now, with a very minimum knowledge of economics, I think Rs 54 crores is quite a lot of money. And, according to the Home Ministry, they do not have the accounts to show for it. And no person from these two NGO’s has come out and given a convincing reply to the Home Ministry’s accusation.

In fact two NGO’s in question, are headed by the same guy, one Bishop Yvon Ambroise. And, since the day the report was published in the Hindu, this person has gone underground. I mean, if you are so honest about your financials, why this mysterious silence?

Similiarly, the home ministry also alleges that, DR Udayakumar, received Rs 1.5 crores of cash, in his account,to fund this agitation. In typical, Udayakumar style, he countered it aggressively, even invoking capital punishment in his defence. And, his NGO, the People’s Movement Against Nuclear Energy (PMANE) released its own account statement, to prove its innocence. This what they said

As usual, no specifics have been given. Also, they do not have a website where they can publish a detailed report. And, our media as is the norm, didn’t bother to verify this statement.

Turns out, the village of Idinthakarai has a total population of 3996. Assuming 3 members per household, total households in that village: 1332.

Going by Udayakumar’s assertion and assuming every household contributed, the total amount collected comes to: Rs 2, 66, 400.

Where did you get the rest of the money, i.e  Rs 22, 51 ,591, from Dr Udaya Kumar? Are you telling us that the fishermen and beedi workers from Kudankulam contributed this amount??

Or is the Prime Minister right, when he says, Foreign money is at play?

Paying protestors to campaign against a venture by your competitor, is an old tactic in India. Every industrialist, worth his or her salt, has done it at some point of time in his/her life.

But in this case, I am unduly worried, because this protest has taken a direction, a direction that does not augur well for the security of our country

1. THE WHOLE PROTEST IS BEING RELIGIOUSLY MOTIVATED

Remember the Bishop Ambroise in the previous para. Well, he is on record, with his opposition to the Kudankulam Nuclear Power plant. Now this person is not some layman voicing his views on this subject. He is a bishop, a very senior guy in the hierarchy of the church.

Why is a representative of the church, that too a Bishop, actively taking part in the protest?

There is not even the usual excuse that he is acting out of his own free will. The Roman Catholic Church is an organization that is proud of its command chain. No church member, I believe, can act independently without the sanction of someone from above. And when guy  leading this protest is a senior functionary in the church, it can mean only one thing

The Anti-Kudankulam protest, has the blessing, from the highest levels of the Church hierarchy.

Now, the church, preferred to stay silent for the entire duration of the first and the second world wars. Hell, this is an organization which did not speak up, when Nazis were carrying out the world’s most brutal elimination program. Even when they knew about it.

So, why, is it taking a pro-active interest in a nittie-gritties of a Nuclear Power Plant, somewhere down in South India?

The involvement of the church cannot be dismissed lightly. In rural Tamil Nadu, for most of the villagers, the voice of reason happens to be the local Parish priest. And all the Parish priests, in and around Kudankulam are heavily against the establishment of the power plant. And they are making no bones about their stand on this issue. And they don’t even have a choice. The person on top of them in the hierarchy, has made his stand very clear.

When a priest, in his Sunday mass and service, exhorts the villagers to join the protest, what is it that they are going to do?

As a result, most of the people in and around Kudankulam are joining the protests, not because they believe in the cause. They are turning up, because their priest asked them to. And they are admitting it openly.

This means, what was supposed to be a peaceful public protest, has, as the Indian Express put it brilliantly, been hijacked by the local diocese and the church. And that is not a good sign.

Not for a country, that calls itself secular.

The only thing that has irked me more than this shameless religious takeover of the movement, is our mainstream media’s turning a Nelson’s eye towards it. If it did not, then why aren’t there more damning articles, like this one, on the role of the Church in the Kudankulam agitation?

Why this thing is not the ‘BURNING QUESTION’ on TIMES NOW? WHY IS IT NOT ON ‘FACE THE NATION’?

And finally, where is this guy?

Figure it out yourself

I mean, when people from the RSS, a Hindu group with no connection to the inner sanctum of Hindu religion, went and participated in a public movement, this dude wasted no time in painting the entire movement with a saffron brush. According to him, ‘Communal forces’ were attempting to use the ‘Platform’ of a ‘Public Movement’ to ‘threaten the social fabric of the country’. Or some nonsense like that.

But here, people who are high up in the Church hierarchy, representing the church, are actively aiding and abetting this unreasonable protest,

So, why the eff is this guy quiet? Why the hell is everybody quiet?

Unfortunately, I do not have answers to these questions.

On a side note: I am not too sure of this thing’s relevance to the article but thought you should know. While looking up Bishop Yvon Ambroise, I stumbled onto this. There is even a nice letter, written to the Vatican, complaining about atrocities, illegalities, arrogance and ignorance of the bishop. Do read it.

97 thoughts on “5 reasons why there is something wrong with the protests in Kudankulam Part:2”

Please do the commentings Cancel reply

U want to contacting the kaipullai?

In case you are not able to see the comments you have posted, I assure you, it is not because of any Kapil Sibalesque pre-screening of negative,unflattering or insensitive comments.

It is because of a non-optional Sibal inspired spam filter called Askimet. If you are a victim of this unintentional pre screening, please mail your comments to the above address, and I will publish them.

Irrespective of their nature

All the thinkings and writings by The Kaipullai is licensed under a Creative Commons Attribution 3.0 Unported License.

Things I have rambled about